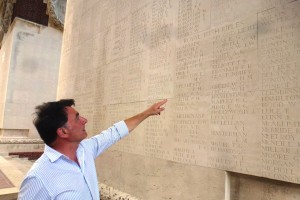 About that time, another group of Metropolitan Police Officers from Hampstead had also come together under the guidance of fellow Western Front enthusiast, Jonathan Nicholls, the first chairman of the London Branch, who was also ‘Assistant Veterans Affairs Officer’ for the Association. He, of course, went on to write what has since become one of the standard works, if not the standard work on the Battle of Arras 1917: “Cheerful Sacrifice”. I never toured with the ‘Hampstead Pals’, but our paths frequently crossed over on the other side of the Channel, and since 1993 several of his ‘originals’ have been touring with me and have now become very good friends.

Although I’ve lived in Hertfordshire for over thirty years, the Western Front is somewhere that feels very much like home. Its church spires, woods, sunken lanes, etc. are not just landmarks, they are more like familiar faces. Life in the ‘Met’ was always too frenetic to even think about writing books, but in July 2010 I decided that the ‘great adventure’ was done and that it was time to embark on another kind of ‘adventure’ by putting pen to paper.

When not delving through war diaries, visiting the battlefields, or reading one of the many Great War titles on my bookshelves, I have a number of other interests. I am passionate about the works of William Shakespeare and love visiting ‘The Globe’ in London and the ‘RSC’ at Stratford-upon-Avon. If I hadn’t stumbled upon 1914-1918, I’d have been quite happy settling for 1564-1616, give or take a few years. I also enjoy walking and cooking, and have been a member of the Scotch Malt Whisky Society for the past twenty-five years. Music is also important to me, but not when I’m reading or writing; for that I need quiet and an environment free from distraction. Very often when I’m researching, and particularly if doing so from home, Radio 3 and Radio 4, not forgetting Cerys Matthews on Radio 6, all serve to provide a suitable backdrop.

Prior to all this, I read French and German at the University of Leeds, which also included a period at Tübingen University in what was then West Germany, followed by a year working in France.