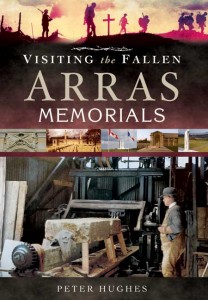 Like waterfalls, their names cascade down the sides of these memorials in a seemingly endless torrent, the essence of which was captured so eloquently by Sassoon when he referred to them as ‘these intolerably nameless names’. And yet, it is still possible to breathe life into those names by uncovering and telling the stories behind the many officers and men whose names are now commemorated on the four memorials to the missing situated in and around Arras, explaining who they were, what they did, and how they died.

The memorials featured in the book are the Arras Memorial, the Canadian National Memorial on Vimy Ridge, the Vis-en-Artois Memorial and the Flying Services Memorial in Arras. The author also takes the reader through the names in the order in which they appear on the memorial, making it far easier than ever before for visitors.

There is comprehensive coverage of gallantry awards, including citations, but this ‘Who’s Who’ guide also links a number of names with events, and even other people, some of whom are perhaps more familiar to us, though some of these connections may come as a surprise. However, for the most part, the majority of those mentioned are ordinary officers and men who just happened to become caught up in the extraordinary events that collectively make up the Great War. This book is the author’s tribute to all those ‘intolerably nameless names’ commemorated in and around Arras.

Among the many characters and personalities are two brothers with a choice over whether to fight for Britain or Germany, a man who played a key part in deciding which aircraft to commission for the RAF in the run up to the Second World War, a man who gave Winston Churchill a flying lesson, a footballer who played for both Manchester City and Manchester United and who was never far from controversy, a man whose conscience was finally swayed by the sinking of the ‘Lusitania’, as well as the man who created ‘Winnipeg’ Crater and a man who crossed the snow-bound Andes in order to enlist.

This is a superb reference guide for anyone visiting Arras and its battlefields and is the third and final part of the trilogy of books by the author of “Visiting the Fallen” – ‘Arras North’ and ‘Arras South’.