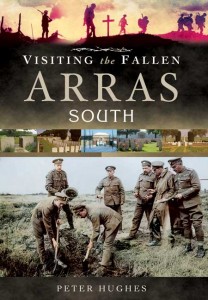 This is the second book in the series, “Visiting the Fallen”, and covers the Commonwealth War Graves Commission cemeteries to the south of Arras, as well as those within the town and its immediate suburbs. Many of these are relatively unknown and still receive very few visitors, even though some of them lie just a short distance away from the well-trodden ‘Circuit de Souvenir’ of the Somme battlefield.

As the reader is introduced to this neglected part of the Western Front the book reveals many stories that are seldom told, uncovering a wealth of characters whose lives became caught up in the events of the Great War. Sometimes the stories are about the officers and men whose names we see as we wander through these quiet cemeteries; at other times we are introduced to a fascinating array of personalities, family members, or other public figures with whom these men were associated.

There is also comprehensive coverage of gallantry awards, including citations, and there are frequent references to minor operations, raids and actions, as well as detailed accounts of the intense fighting of April and May 1917 in what became known as the Battle of Arras. Among the many personal and collective tragedies there are lighter moments, but also great acts of courage, heroism, and self-sacrifice.

The book includes a link to Ulster and the Curragh Incident and a connection to King George V and Queen Mary; a hero of the Messina earthquake disaster in 1908, a father whose search for his son’s grave reaches its sad conclusion, a mysterious death in woodland, the moving spectacle of men waiting outside makeshift confessionals in a barn lit by candlelight before going up the line into battle, and a man whose father was a close collaborator with Sir Fabian Ware during the early days of the War Graves Registration Commission; there is even a remarkable prehistoric discovery and an improbable tale regarding an African hawk eagle that would not be out of place in a ‘Harry Potter’ novel.

Like its companion volume, ‘Arras – North’, this second part of the author’s trilogy tells the story of warfare on the Western Front as illustrated through the lives of those who fought and died on the battlefields in and around Arras. This is an essential reference guide for anyone exploring this area and its conflicts.